We've had 2 birthday since I last wrote. Bug turned 3 and a week later his daddy turned 36.
Rhys is 4 months now and in the 99th percentile for height and weight. He is huge and sweet and a joy that I didn't know was missing. I love watching him each day learn and figure out new things.
Bug is a great brother and I can't believe that he is 3. Some ways I feel like he is still a tiny baby and other ways he has been around forever.
I have two little boys who are the best things ever. How did I get so lucky!?
Posted by Brooke (FBX Adventures - In Parenting) at 11:08 PM 3 comments:

(If you're just joining in now, I started rambling a few days ago and am just continuing...)
When we went to the OR, I got my spinal and was laid back on the table. All was going well...lost feeling in my legs...then my chest. I couldn't feel myself breathing. Commence freak out.
Being tied to the table didn't help. Hey. It proved to be the best way to get my husband in the room. The Anestesiologist  ran out and brought him in, and I was totally fine.
The rest is your typical csection story. Hubby watched Rhys come into this world, all 9 pounds, 11 oz of him.
With Bug, he couldn't latch/suckle. By the time we got the problem figured out, he had no interest in the boob. I was really worried that we'd have the same problem with Rhys. Luckily, we had amazing Lactation Consultants. He only had a little formula in the hospital (at almost 10#, he was a hungry guy.) We left the hospital nursing full time (and still are...) Full disclosure: I blog while breastfeeding.
We've had one "bump" in the road...more on that later. 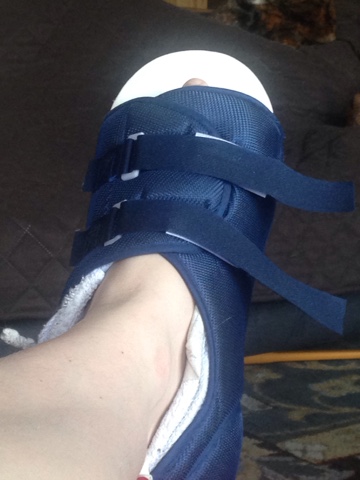 Posted by Brooke (FBX Adventures - In Parenting) at 3:14 PM 3 comments:

...yesterday's blog post was interrupted by the Percocet haze I was in...more on why later...
Rhys's cesarean was scheduled for 2/19 and I had to go in for preop on 2/18. I wasn't excited about surgery, but I was happy to not be pregnant anymore. During preop I found out that my surgery was scheduled for 12-noon. I wasn't allowed to eat or drink after midnight, which pretty much convinced me that I was going to die.
I woke up bright and early and spent time with Bug. We left around 9:30 to go to the hospital. I was supposed to be there at ten, but we stopped to take pictures and I lost paperwork...so only a little late. Opps. 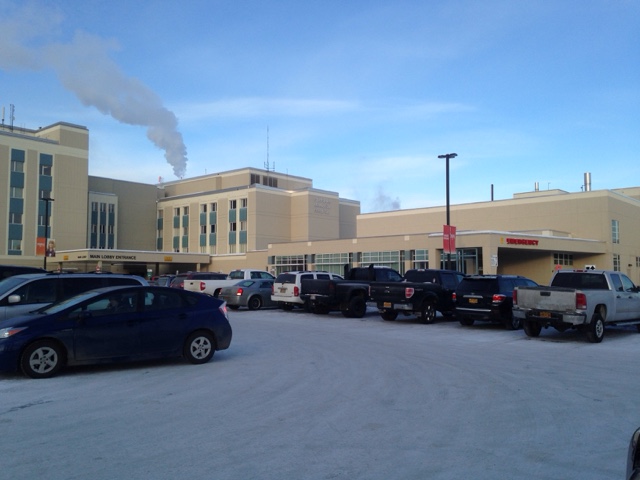 We met my nurse at the nurse's station and went to my room. I instantly loved her and her sense of humor. That helped calm my nerves.
The Anesthesiologist came to meet me, and I broke it to her that I would have a panic attack. She tried telling me I'd be fine. I tried telling her to not drug me when I did freak. Something about not feeling your legs or chest and having your arms tied to the table. With Bug, I don't remember the first 2 hours after he was born. I didn't want a repeat.
To be continued...
Posted by Brooke (FBX Adventures - In Parenting) at 2:12 PM 1 comment:

Email ThisBlogThis!Share to TwitterShare to FacebookShare to Pinterest
Labels: Rhys

My grand plans of blogging went out the window. Shit happens.
If you didn't hear, we had a baby! Actually a lot of shit has happened, but that is exciting and makes me happy.
Rhys was born on February 19th weighing in at 9 pounds 14 ounces. He was 23" long. As much as I didn't want a repeat cesarean, thats what I had. My OB wanted me to have him on 2/9, but I wanted to try for a VBAC. My due date (according to my OB) was 2/16 (I still say 2/24.) If I had a cesarean, I wanted him to be born after his due date. I wanted him to have a chance.
With Bug, he never budged, and was born via emergency cesarean after 36 hours of labor and 3 of pushing. I was miserable after, and had PPD. I knew that if I didn't go into labor on my own, I didn't want to be induced. I couldn't go through the labor/delivery from hell again.
Long story short, on my due date Rhys was high, and there were no signs of him leaving. I wanted some control, so a cesarean was scheduled.
To be continued...
Posted by Brooke (FBX Adventures - In Parenting) at 12:28 PM 3 comments:

Daniel Tiger on the Loose

Halloween is one of my favorite holidays. There is no stress of making a big meal, or purchasing perfect gifts (although, I'd lie if I didn't say I liked doing those things too.) Halloween is just fun. The park in town has a big Halloween party every year, and this was our first year going (last year it was snowing.)

Long story short, he was a Daniel Tiger/Nittany Lion hybrid, but looked adorable. His favorite thing in the world was open, the train. We got away with only riding it twice (having a long line helped.) He "sort of" got the idea of trick or treating and his favorite prize he walked away with was a new tooth brush. Hopefully he is that happy about tooth brushes in a few years.

We had a great weekend. Sunday, the poor guy woke up with a high fever. I of course remained totally calm (read: panic and call the consulting nurse and all but took him to the ER.) Just as I was about to cancel all plans for the week and prepare for a horrible illness, I decided to look in his mouth. There was the start of his 2 year old molars. Poor guy was miserable, didn't eat or nap, but so far nothing else has seemed to come up (aka-I think it is his molars.) He wouldn't eat dinner (well, he tried....but he had a hard time chewing) so he got the dinner every 2 year old wants for dinner --Ice Cream. 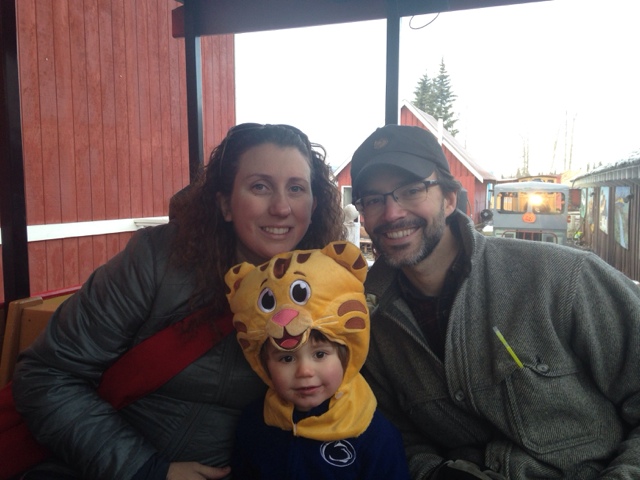 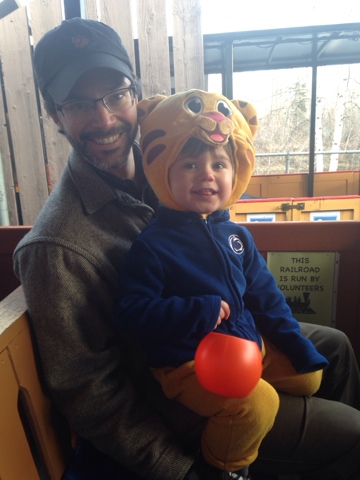 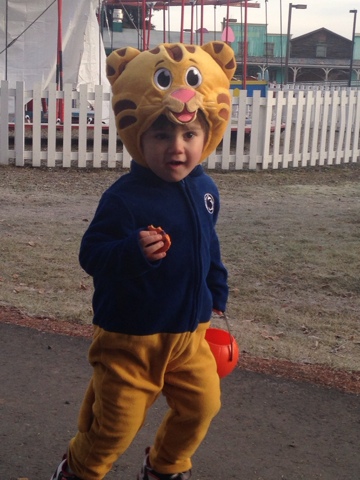 I'm mom of the year. Bug has (had) a hat that he loved so much. He wore it everyday, and sometimes when he didn't need a hat. Well....I lost it a week ago. I've looked everywhere and nothing. Poor guy is so bummed.
I know I said before to buy two of something if your child loves something, but I failed my own advice.
Long story short. If you happen to have this hate laying around somewhere, I will happily buy it from you. It's from Old Navy and about 2 years old. 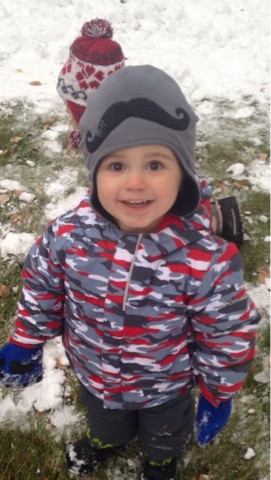 Posted by Brooke (FBX Adventures - In Parenting) at 9:46 PM 1 comment:

Last March, I thought to myself, "Two more months and then I'll have all summer to blog." I did indeed have all summer....but it didn't go quite as I had planned.

Let's play a little catch up.

In May I went to a conference in Texas and almost sweated to death. I don't know how those of you who live there can handle the heat...and that was just May.

In June, El' Bug and I traveled back East to Pennsylvania. I don't know about you, but traveling for 15 hours with an overactive 2 year old is LESS than fun. Also, if you're like me and you bought the "huge" extra safe car seat (in our case it is a Britax Advocate) DO NOT PUT YOUR CHILD ON THE PLANE IN THE SEAT. I can not explain how how uncomfortable I was for 15 hours (one way, we'll get to the way back in a minute.) The seat took up his spot and part of mine. I sat with my shoulders rolled in for the whole time (so the person next to me had their seat). IT WAS HORRIBLE!!!

Pennsylvania was a quick trip. One thing I did figure out while I was there was that El' Bug was going to become a big brother. I was so excited and it killed me to not say anything to my husband, but I wanted to tell him in person. I also was lucky enough to start feeling like shit prior to even taking the test (which is why I took the test.) It was our second to last day there, which was good because I probably would have blabbed it to everyone.

After a quick trip, it was back onto the plane for another 17 hours of hell with a car seat that I'm pretty sure grew over the two week visit. On top of being squished into the seat I spent about 6 hours trying to not throw up. Have I mentioned pregnancy was awesome?

While Bug and I were gone, my amazing husband spent the entire time building me the world's most amazing garden (which is on the FB page if you missed it.)

He left for the field, and I resigned myself to the couch and showered when I could stand up long enough to get my hair wet. Luckily Bug is in daycare so I was able to must up enough strength (aka-not puke) and drive him to school, and then I'd come home and sleep/be sick until after nap then I'd go get my best buddy.

My husband came back from the field because he hurt his back. I felt really bad for him because he loves his job, and this is the icing on the cake for him (camping in the Alaskan wilderness). I was however SO happy that he'd be home to help with Bug.

I spent my summer feeling like the worst momma ever.

In July we went blueberry picking and were enjoying an awesome afternoon. I managed to bend over to pick up a berry and poof, out went my back. I tried to pretend that it was going to be fine. Hubby and Bug went home, and I stayed to pick with a friend. After another 30 minutes I realized I wasn't okay and I really did something. On the way back to my house I started feeling sick. By the time we pulled into the driveway I couldn't even get out of the car.

Normally when I hurt myself I pretend like everything is fine and refuse to do anything about it. Now that we have Bug, I knew I needed to figure out what to do with him. LUCKILY one of his teachers at daycare lives close, is young (aka not in bed at 10) and answered my message. She came over and we went to the hospital where I spent more time than I'd like. There isn't much they can do for you when you're in excruciating pain. My asthma started kicking in while there so between that and the drugs I didn't feel much better.

I spent the next 8 days on the couch and after a few extra trips to the doctor to put in some ribs that popped out of place I started to feel normal.

Have I mentioned how "awesome" my summer was? I didn't have much energy to do much more than lay on my couch. Blogging was the last thing on my mind.

The one thing I remember daily is that even if my summer sucked, I am still very lucky and there are so many people who would love to have those problems.

So long story short, Bug is going to be a big brother. We're pretty excited. :) Hopefully I'll blog again before the baby comes....

Add blog to our blog directory.